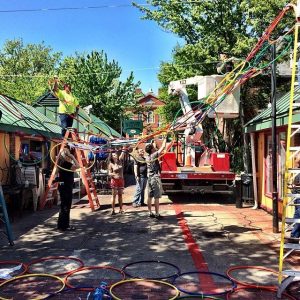 Salem Main Streets’ (SMS) mission is the continued revitalization of downtown Salem as a vibrant, year-round, retail, dining and cultural destination through business retention, recruitment, and promotion of the downtown district.

SMS produces and supports numerous community events and initiatives throughout the year, including the Salem Farmers’ Market, Salem Arts Festival, Salem’s So Sweet, and the October Information booth. SMS operates thanks to the generosity and partnership of the City of Salem and Mayor Kimberley Driscoll, the Salem Chamber of Commerce, Destination Salem, and many other local business sponsors and community volunteers. Salem Main Streets is a 501(c)(3) non-profit organization founded in 2001 by the City of Salem and a coalition of downtown businesses and area residents, and is modeled on the National Trust for Historic Preservation’s National Main Street Program.

The Main Street Four-Point Approach™ is a comprehensive strategy that is tailored to meet local needs and opportunities. It encompasses work in four distinct areas — Design, Economic Restructuring, Promotion, and Organization — that are combined to address all of the commercial district’s needs.

Organization– Building collaborative partnerships between a broad range of groups, organizations and constituents who need to be involved in the downtown’s revitalization.

Promotion – Changing people’s attitudes toward the commercial district and marketing the district to residents, investors, visitors and others.

Economic Restructuring – Studying and strengthening the downtown’s economic base and working to gradually expand it by helping existing businesses become stronger.

Design – Improving the physical appearance of the commercial district and advocating for the improvement, historic preservation and re-use of existing buildings and architecture. Design improvements include buildings, streets, sidewalks, signs, parking, and all other aspects of the physical environment.

One Response to “Our Mission”