Do you sense something in the air? Some level of seismic activity of a paranormal nature? You would be tuning in to Salem Con, the first ever celebrity-filled paranormal convention, to be held in Salem Ma, April 10-12 at the Hawthorne Hotel.

Mass Ghost Hunters Paranormal Society, a Gloucester-based historical preservation and paranormal event group has established the weekend. Salem Con will be filled with celebrities, lectures and vendors. Paranormal and historical enthusiasts are welcomed.

Marc Arvilla, Founder/Lead Investigator explains “We decided to call it Salem Con because that’s exactly what it is. Yes it’s a paranormal conference, yes most folks involved are in the paranormal field, but this is also about Salem’s history, culture, and the true stories of the people that shaped this area.”

For example, among the speakers, Jeff Belanger hosts the New England Legends series on PBS and John Zaffis is the director of the Paranormal Research Society of New England.

Arvilla continues “Our goal for this conference is to teach people about the history of Salem, the history of paranormal investigating, and that they can have fun while doing it. If someone can walk away from this event learning something new it will be a success.”

The weekend begins with a “Celebrity VIP Party” on Friday April 10th from 8 pm to midnight at Nathaniel’s in the Hawthorne. Guests will mingle with their favorite celebrities and hear some of their “behind the scenes” stories.

And, who will be there on April 11th?

All lectures will take place in the Hawthorne’s Library Room.

“The Hawthorne Hotel seemed like the best choice for this event,” reveals Avilla. “The hotel has such a rich history and is central to everything there is to explore in Salem. When we approached Thomas MacDonald, the sales director at the Hawthorne, with the idea of a paranormal conference he offered his full support. Plus there is that ‘rumor’ that the hotel is haunted…”

Speaking of haunted, Gone Haunting will sponsor a “Celebrity Ghost Hunt” Saturday at 8pm. Location not yet revealed.

And what is a convention without vendors? The Hawthorne Ballroom will house the vendor area: 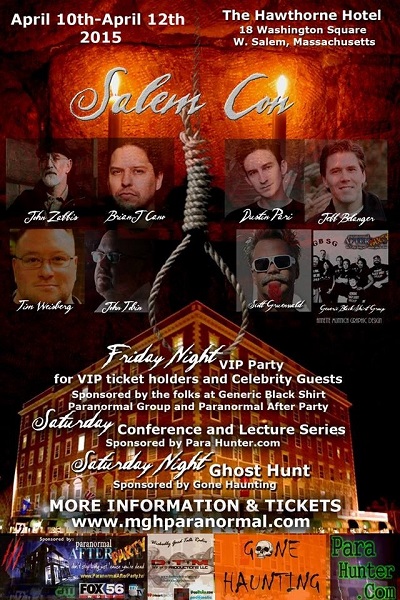 The weekend concludes with a Sunday morning breakfast at the Hawthorne where Mass Ghost Hunters Paranormal Society invites people to share some stories, revelations, even a “sighting” or two if anything happened from the previous night.

Sounds like an interesting effort to connect the dots between the paranormal and the history of Salem, while at the same time giving you the opportunity to have an entertaining & educational experience. For ticket and other information, go to http://www.mghparanormal.com/ or write to mghparanormal@gmail.com.