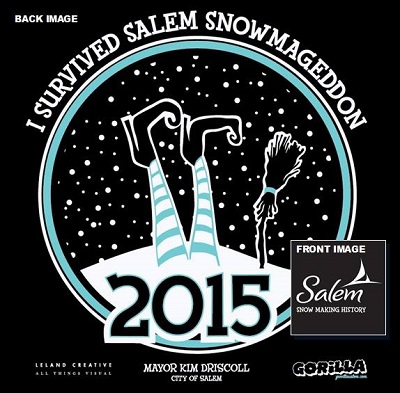 Although Winter is far from over and we can expect more depressing bouts with snow, something positive has emerged. We have seen a number of good Samaritans come out of the woodwork— or rather snow banks to help fellow Salem residents get through this record-setting season. And Mayor Kimberly Driscoll has an idea on how to thank them.

‘Salem Snowmaritans’ will be honored with limited edition ‘I Survived Salem Snowmageddon 2015’ t-shirts.

You’ve seen them. Strangers shoveling someone else’s sidewalk. Motorists stopping to help push a stalled car or jumping a battery. Teens going shopping for the elderly. Snow plowers working into the late hours of the night or early morning.

Residents can nominate ‘Salem Snowmaritans’ by sending an email to Mayor@Salem.com with their name and phone number, name of the nominee, reason for their nomination, and the nominee’s recommended t-shirt size. Mayor Driscoll plans on sharing stories of ‘Salem Snowmaritanism’ on social media throughout the next few weeks.

“Nasty weather can’t beat Salem’s sense of community,” points out Mayor Driscoll. “The storms have actually created shining examples of neighborly love throughout our city and we want to hear all about them. We’ll share these stories and help turn cold frowns into warm smiles by remembering what a great City we live in, even when the wind chill is 20 below! We hope folks will spread the good word through social media and help us beat back the blizzard blues by celebrating our undaunted community spirit.”

Additionally, the Mayor’s Office will be selling these limited edition t-shirts for $15 per shirt for those who would like to purchase a Snowmageddon t-shirt as a keepsake. And the best part of that is all proceeds from the sales will go directly to the winter fuel assistance program for needy Salem residents administered through North Shore Community Action Programs. Residents can also submit their orders to Mayor@Salem.com until March 1st.

Local designer Brent Leland of Leland Creative, along with Gorilla Printing, both of Salem, helped design and print the t-shirts, with the assistance of Kate Fox, Executive Director of Destination Salem.

“This ridiculous amount of snow has given us good reasons to be grumpy, but it has also brought out the best in Salem as we’ve witnessed folks going above and beyond to help others during this unprecedented cold, hard winter,” states Mayor Driscoll.

Surviving Salem Snowmageddon 2015 has not been easy. But we will get through it together.