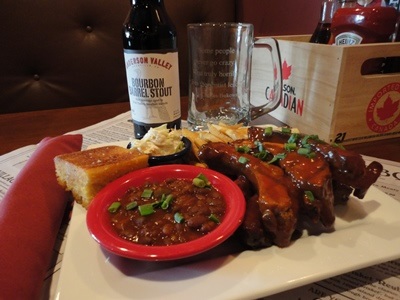 Many of us on the North Shore have friends that have visited Salem during the high traffic October season. These friends naturally enjoyed themselves but said they would like to come back when there is a little less “Salem” going on. What better time to invite them than next month during Salem Restaurant Week (March 13-17 and March 20-24)?

It’s a great way for them to sample the delights that Salem has to offer. Perhaps they’ve heard that you could eat out every night for two weeks in Salem and be able to go to a different restaurant each night? Take them for a leisurely stroll along Washington Street and up Derby and around. Your path will be dotted with choices. Pick a place, any place.

For those new to Restaurant Week, it is produced by the Salem Chamber of Commerce as a way to invite the public within the doors of neighborhood dining establishments. During the 10 days only, participating Salem restaurants will offer either a specially priced two-course prix-fixe dinner menu, or a three-course prix-fixe dinner menu, or both (price will not include drinks, taxes or gratuities). 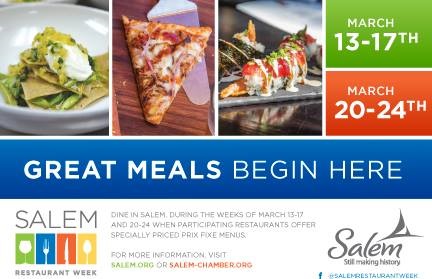 The Chamber notes on its website “Salem has become a culinary destination and people really look forward to this event. Expect a wide variety of delicious foods – from steak to seafood, American to ethnic, there is something for everyone. Restaurants offer multiple choices for appetizers, entrees as well as desserts.”

Mark your calendar now. Invite your out of town friends to Salem Restaurant Week. As the sign says, “Great Meals Begin Here.”