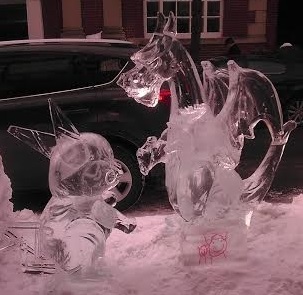 Salem has been invaded by ice creatures, but worry not, as they are friendly. Early morning joggers and breakfast attendees were greeted throughout downtown Salem by workers gently unloading and placing ice sculptures in per-determined sites as part of the Salem‘s So Sweet Chocolate & Ice Sculpture Festival.

This year there will be more than 15 large sculptures around downtown Salem, with themes including a mermaid, ruby slippers, a rocking horse, and many more! A map of sculptures and locations is available here and on brochures distributed around town.

Take the kids out and see how many you can find. Make a day of it in Salem.

NOTE: due to the historical amounts of snow we have received, the Salem Trolley will not be running its route on Feb. 7 and 8 as initially planned.

After all the ice on the sidewalks and streets we’ve had to endure and groan about recently, it’s nice to see ice in a way to make you smile. The Salem’s So Sweet Chocolate & Ice Sculpture Festival  runs Feb. 6-15th.