While today’s rapid-fire technological advances are changing film-making with consumer interactive platforms such as Periscope, there was a time in the history of Hollywood film-making that was just as exciting & tumultuous. And that was the 1930s, which is the subject of the next PEM/PM, Aug. 20, 6-9pm at the Peabody Essex Museum. 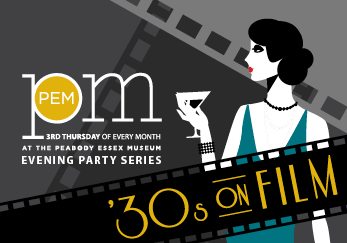 It was “The Golden Age of Hollywood” and according to AMC’s Filmsite.org website “The 30s was also the decade of the sound and color revolutions and the advance of the ‘talkies’, and the further development of film genres (gangster films, musicals, newspaper-reporting films, historical biopics, social-realism films, lighthearted screwball comedies, westerns and horror to name a few).”

Silent stars who dominated the screens faded away unable to transition to scripts that required more acting skills, to be replaced by new stars on the horizon, such as Jean Harlow, Greta Garbo, John Wayne, Clark Gable and Shirley Temple.

The growing importance & interest in the film industry to consumers spurred innovation. The first daily newspaper for the film industry, The Hollywood Reporter, had its debut in 1930. The world’s first drive-in theatre opened in Camden, N.J. in June, 1933 .

If you’re interested in learning more about 1930’s Hollywood, the AMC site is extensive.

As far as the evening’s activities during PEM/PM, highlights will include art making with film negatives, a photo booth equipped to bring out everyone’s inner movie star, a food tasting with popcorn from Salem’s favorite E.W. Hobbs and a cocktail tasting and talk with author and mixologist Warren Bobrow.

In the Atrium, you will find hot Jazz and swing tunes by the Carubia Brass Bands featuring Jim Fryer. 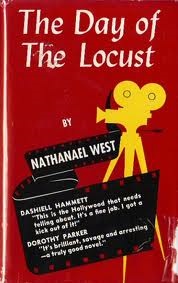 In conjunction with PEM’s summer film series, Benton and the Big Screen, guests can watch the film adaptation of Nathanael West’s critically acclaimed novel about 1930s Hollywood, The Day of the Locust (Rated R, 144 minutes). Film expert Michael Dow will introduce the film and join a discussion following the film with PEM lead interpreter Emily Fry and curator Sarah Chasse

For those of you who haven’t yet seen American Epics: Thomas Hart Benton and Hollywood, this is the time to experience the exhibit which explores how the motion picture industry influenced and ignited Benton’s creative imagination. Melding Old Master European painting traditions with Hollywood’s cinematic and production techniques, Benton reinvented 20th-century American narratives and captivated the public with his signature brand of visual storytelling. 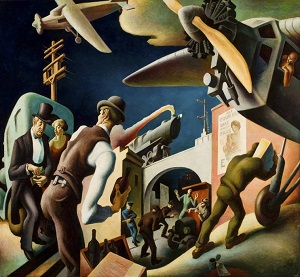 PEM’s exhibition, the first retrospective of Benton’s art in 25 years, gathers more than 100 works, including the artist’s paintings, murals, drawings, prints and illustrated books. The exhibition, which closes Sept. 7, pairs curated clips from Hollywood movies with Benton’s art from the 1920s through the 1960s to take visitors on a journey through America’s myths and into its national character.

PEM’s evening parties — with music and dance performances, food tastings, lectures and art-making stations have become a monthly tradition since being initiated in the summer of 2011. Free admission for members and Salem residents (with ID), while nonmembers pay $10 at the door. There is always a cash bar and a special small plates menu available from the Hawthorne Hotel.