It’s close to midnight….. and something evil’s lurking in the dark
Under the moonlight …..you see a sight that almost stops your heart

Setting aside the eerie sights that these lyrics evoked in Michael Jackson’s “Thriller,” in Salem these lyrics highlight the sights from last night as thousands upon thousands of humans, demons and whatevers (see the fellow to the below/ right) celebrated Halloween 2013.

Then magically and orderly disappeared. Poof. 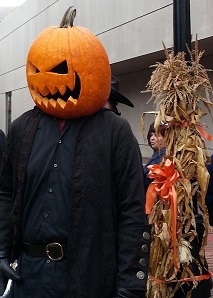 We won’t have the numbers for a few days, but it was crowded.

Visitors and locals, having a good time, then hopefully in the days to come telling friends & families about what Haunted Happenings is all about in Salem, MA. Friendly folks, shocking scares, dandy deals, and fabulous food. Glad you had a good time!

We want to take a moment to thank all our great Salem Main Streets volunteers who gave of their time and energy. But also this year to the community members who came through for the Destination Salem “Shutdown” table when it was needed. And to the city workers involved in Haunted Happenings from the beginning to the middle to the end. As well as law enforcement for making it a safe evening.

Plus thanks to the Attractions & Downtown Merchants for getting involved in this crazy time and each in their own way contributed to the atmosphere of Haunted Happenings 2013.

BUT— unlike the werewolf who crawls out only with the full moon or the vampire who only rises at night, Salem has a life beyond the framework of October. Come back and visit us another time; as one local blogger has pointed out, Salem just loves its multi-day festivals. From Haunted Happenings to Heritage Days to restaurant week (next week!) to Salem So Sweet, our Downtown merchants strive to be your year ’round destination.

You can be strange, just don’t be a stranger.