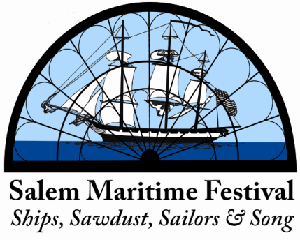 Ships, sawdust, sailors and song all in Salem this weekend as the National Park Service celebrates the 28th year of the Salem Maritime Festival.

But, take note, this is not your typical ocean-themed event with one or two seafaring craft docked in the harbor for walk-aboard tours. Visiting & Participating Vessels include:

Not surprising then that one of the most popular features of the Salem Maritime Festival will be the free 90-minute boat rides around Salem Harbor. In fact, on Saturday, festival goers will be given the opportunity to enter a series of raffles for chances to set sail in Salem harbor on some of the above-mentioned craft. Lottery entries begin 10:30am

Music is also a big part of this festival.

11am, Ye Mariners All

On August 25, 1916, President Woodrow Wilson signed the act creating the National Park Service, a new federal bureau in the Department of the Interior responsible for protecting the 35 national parks and monuments then managed by the department and those yet to be established.

“The Centennial will celebrate the achievements of the past 100 years, but it is really about the future. It’s about kicking off a second century of stewardship for America’s national parks and for communities across the nation.  Most importantly, it’s about inviting you to join us.” — NPS