While there are a lot of Do-It-Yourself books, videos and TV shows today to help you build your house, back in 1668 when sea captain John Turner was having the Turner Mansion constructed in Salem Ma, there was a lot of trial and error. With limited material resources at hand and no power tools, building a house in Colonial Massachusetts required skill, ingenuity and a lot more. Luckily, Turner’s team would even make the hosts of PBS’ “This Old House” happy, as the structure still stands. Today it is known as The House of Seven Gables. And you are invited to tour it during February School Vacation Week, Feb. 17-25. 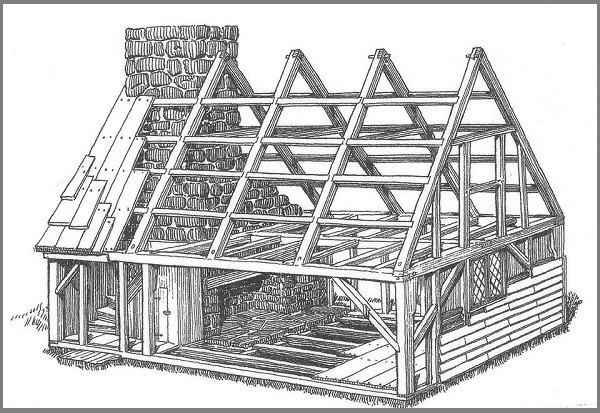 Designated a National Historic Landmark District in 2007, The House of the Seven Gables is best known today as the setting of world-renowned American author Nathaniel Hawthorne’s 1851 novel.

But, before that, it was to be a home and the question is what tools and designs worked best in 1668?  What failed? How did they learn from their mistakes?

Children and their families will find out. Tools, as you can well imagine, are part of the intrigue — some will look familiar 350 years later. Some won’t. Those attending will learn about the tools of the trade and which materials were used most often in Colonial Salem.

It gets even better. This is an interactive event. All in attendance will also get the chance to experiment with different construction techniques at each of The Gables’ workshop stations.

Plus, as an extra special treat for the kids (and perhaps adults) you’ll be able to fold and decorate your own paper house to take home!

Special interactive presentations— Why Do We Have Gables? — are scheduled at 11:30 a.m. and 1:30 p.m. when Museum staff explore the construction of historic buildings and which parts of these structures are strongest.

School vacation programming is included with admission from 11 a.m. to 3 p.m. daily. Check 7gables.org for hours, and rates. The program is free for Salem residents with valid identification and Museum members.

Finding a secret or hidden room is the stuff of mystery or spy books, but it doesn’t happen in real life… or does it? You are invited to visit the House of Seven Gables in Salem Ma on January 22nd for a symposium and tour of a recently uncovered living space on the second floor. 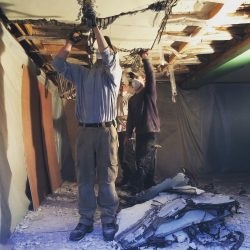 The Secret Room is in fact one of two “under-utilized 2nd floor rooms. By removing old partitions and 18th century flooring, a large chamber and adjacent living space were uncovered. Also found to add to the historical significance were the original 17th century wide pine floors, hand forged nails and an exposed gunstock post.

Gables executive director Kara McLaughlin has stated that “Rarely does an iconic property with the history and significance of The Gables yield such an opportunity.”

To take advantage of sharing that opportunity for discovery and interpretation, the free symposium will feature staff and some of the region’s restoration specialists recounting what should be most fascinating behind-the-scenes info.

Space is limited, advance registration is required, and some on-site parking is available. For more details go to www.7Gables.org/events or call 978-744-0991.

Step back in time and then help not only bring the secret room into the present, but perhaps share an idea or two for its future! 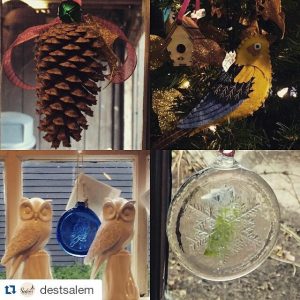 What can you learn during a Christmas house tour? How people lived, dressed, ate and celebrated Christmas over the centuries? That is interesting enough — but how about that Christmas was banned in Salem and throughout Massachusetts Bay Colony for nearly two centuries! So, as fascinating as the history of the Salem Witchcraft trials are to read and believe, the tale of Christmas being banned here is equally strange and you can learn more about that during the ongoing Christmas Tours at the House of Seven Gables!

The daily tours (10am-5pm now thru Dec. 31st) will lead you from room to room in the house, which will of course be beautifully adorned with traditional holiday decor. You will see how life changed for the various occupants over the centuries, drawn against the backdrop of the winter holiday season.

The important revelation for many attendees will be that you are being given the opportunity, at The House of the Seven Gables mansion, to walk the halls of a house that has stood the test of time and to witness the changing nature of Christmas in New England.

And no matter which day and time you take the tour, mark your calendar for the accompanying Home for the Holidays event this Sunday from 2-4pm. Consider it a chance to take a break from the hustle and bustle of the season and enjoy live music, family activities, and festive decor at this National Historic Landmark museum campus.

The House of Seven Gables is located at 115 Derby Street, Salem Ma. Christmas tours are included with admission. For more information about Holidays at The Gables, or for any other questions about The House of the Seven Gables, please contact rconary@7gables.org, or call 978-744-0991 x104.

This is a month that was 150 years in the making at the House of Seven Gables as it honors Caroline Osgood Emmerton, founder of The House of the Seven Gables Settlement Association. 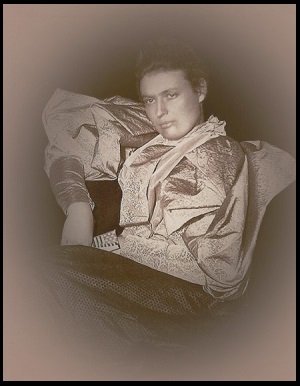 When you travel to Salem to shop or dine or look upon the Tall Ship in the Harbor, you are also invited to explore the life of one of Salem’s most prominent citizens and generous philanthropists during the progressive era. You will learn how Emmerton transformed a centuries-old home into one of the most well-known and beloved houses in the world.

Also, discover how Caroline Emmerton worked to shape her community and provide educational opportunities for those who needed them most. This is a legacy The Gables proudly continues today.

Specifically, April 21, 2016 marks the 150th birthday of Caroline Osgood Emmerton. As part of a year-long celebration, you are invited to share in Emmerton’s special day by enjoying “her” tour of the Gables, as it was written in 1910. This tour will be offered on the hour from noon – 3pm. This is free for Salem residents & members and $13 for the general public.

The 2016 exhibit, itself, Caroline Emmerton: An Unbounded Vision, will be open to the public free of charge from 10am – 5pm.

Can’t make it on the 21st? More Emmerton fun and celebrations are happening on Saturday, April 23! 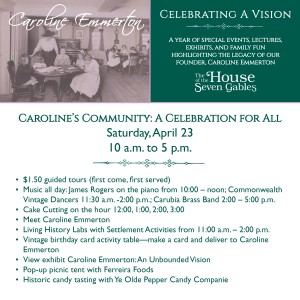 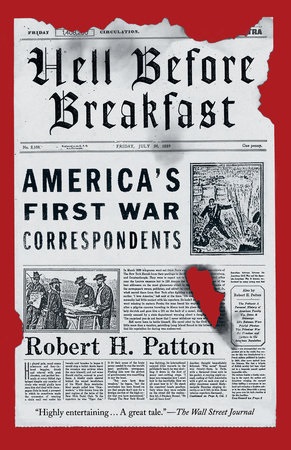