Raised mugs will be the order of the day at Salem’s Old Town Hall this Saturday, 9/14/13 from 7-11pm as Pamplemousse and Social Palates are joining forces to host the third annual Salem Ma Oktoberfest.

The German-themed event will feature beer from local breweries as well as traditional fare from Salem businesses including Polonus Deli, the Flying Saucer Pizza Company and the Lobster Shanty. A continuous line up of entertainment includes local acts The Nick Consone Band, Qwill, and Freevolt. 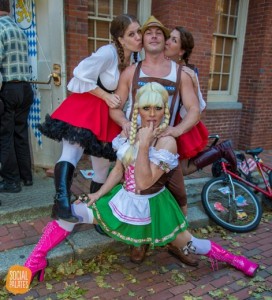 “Everyone had such a good time last year, there were games, contests and many showed up in traditional costume,” says Pamplemousse’s Diane Manahan. “We knew right away that this would become an annual tradition.”

Featured highlights for this year will be the Bratwurst eating contest, the Apple Challenge, Kazoo-kioki, and the German costume contest with prizes in each category. The host this year is Erik Rodenheiser of the Griffin Theater as Olga, the Angry German Beer Wench.

All proceeds will benefit the Salem YMCA. Last year’s event raised over $5,000 to support the Y for All Campaign.

Manahan adds that “Local politicians are donating their time and dressing up in traditional German costumes to help with the cause. Look for State Senator Joan Lovely, Councillor at Large William Legault, Councillors Josh Turiel and Tom Furey as well as David Eppley and Beth Gerard who are running for Ward 4 and 6.”

Tickets are $20 per person (21 and older, please) and include admission, German hats and kazoos, a souvenir mug. Beer from Blue Hills Brewing, Narragansett, Cody Brewing and Notch will be available for $2 and $3 as well as German wine. A variety of German faire will be available for purchase.Tickets can be purchased at Pamplemousse, Salem Cycle, The YMCA (all located in downtown Salem) and at the door. This event has been sold out each of the past 2 years, so get your tickets early!