Patriotism is something that will never go out of style, and in Salem MA we do up the most patriotic day, the 4th of July, in real style.

We kick off bright & early at 9am with Mayor Kimberly Driscoll on Salem Common introducing the traditional reading of the Declaration of Independence. Dann Maurno will once again read the document. Bob Kendall will provide piano music, a quintet from Salem High School’s Witch Pitch? will sing the “National Anthem,” and audience singing will be led by Maureen Dalton.

“There’s no better place to celebrate Independence Day than in historic Salem,” declares Mayor Driscoll to potential visitors. “Start off bright and early at Salem Common for the annual reading of the Declaration of Independence, spend the day visiting the City’s numerous historic sites and attractions, dine at one of dozens of remarkable restaurants, and end your day at historic Derby Wharf for all of the festivities.”

And by ending the 4th of July with festivities, she means a BIG ending. At 9:15pm, Salem will loudly & proudly cap off its Independence Day celebration with a fireworks extravaganza, accompanied live by the Hillyer Festival Orchestra playing a rousing rendition of the “1812 Overture” and other patriotic live music throughout the entire fireworks display! 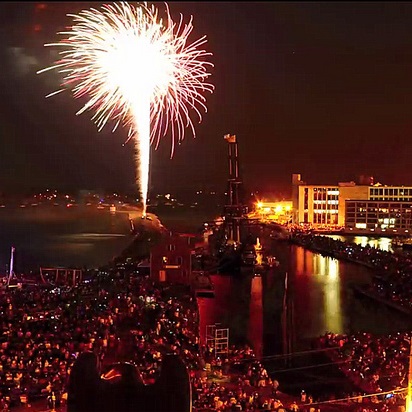 That is historic in itself!

The Site consists of nine acres of waterfront land and houses a dozen historic structures. These include the Custom House, where famed author Nathaniel Hawthorne worked, and Derby Wharf, which was used by America’s first millionaire, Salem merchant Elias Hasket Derby. With historic Salem Harbor, including hundreds of boats moored and the replica of a 1700’s sailing vessel, the Friendship, as a backdrop, Independence Day in Salem is filled with the history that helped make America the free nation it is today.

But the history and patriotism doesn’t end there.

As an additional tie-in there will be a flyover by the 104th Fighter Wing from Barnes Air National Guard Unit, which is located in Westfield, Massachusetts and proudly claims the honor of being one of the oldest flying units within the Commonwealth.

As Salem is also the birthplace of the National Guard — yet another patriotic and historical element, Mayor Driscoll adds “it is especially meaningful for Salem to have a flyover by the 104th. Salem Common was the site of the first muster in 1637 and continues to host the annual National Guard muster to this day.”

Besides all that history, there will also be entertainment on the 4th of July program.

Live entertainment on the Main Stage begins at 5pm with The DITTO band. Lead vocalists and guitarists Gary Santarella and Roger Kimball have entertained audiences for over 40 years playing mainstream music classics by James Taylor, Neil Young, Harry Chapin, Simon and Garfunkel, Crosby Stills and Nash, The Beatles, and many others.

Opening Ceremonies begin at 7:15pm when Mayor Driscoll and other local dignitaries will lead a parade down the wharf accompanied by the Salem Veterans Honor Guard and Salem Boy Scout troops. The National Anthem will be sung by Nadine Adisho, Leah Morgenstern, Danielle Gautier and Tyler Leger of Salem High School’s a capella group Witch Pitch?

Immediately following opening ceremonies Maestro Dirk Hillyer and his orchestra will deliver another great 4th of July program as they have in years past.

Dr. Hillyer reveals, “This year we are doing a 50 year anniversary of the music from 1966—The Mamas and the Papas (California Dreamin’), Beach Boys (Good Vibrations), Henry Mancini film hits (Pink Panther, Peter Gunn), and cartoon favorites like Flintstones! Of course we’ll do our popular Tchaikowsky “1812 Overture” to the fireworks along with other patriotic greats! Bring your blanket and join in on the fun!”

For this year’s intermission entertainment there will be two additional treats. A delegation of talented 8th grade singers from Salem’s Collins Middle School will be performing and members of the Marble head Little Theater will entertain the audience with songs from Broadway.

If you are bringing the kids, take note that earlier in the afternoon free children’s activities begin at 4pm with the opening of the Kids’ Space, where young ones can play games, win prizes and get their faces painted, all thanks to the generosity of the MeetingHouse Church in Salem and Walmart. Also, look for the MAGIC 106.7 street team along with the MGH Pediatrics tent on-site with lots of cool give-a-ways.

And of course, on site Food Tents will also open at 4pm with hot dogs, French fries, fried dough, kettle corn, and other favorites.

Join your friends & neighbors and fellow Americans as we share an Independence Day of patriotic pride in a setting that is historic in itself, The Salem Maritime National Historic Site on Derby Wharf.