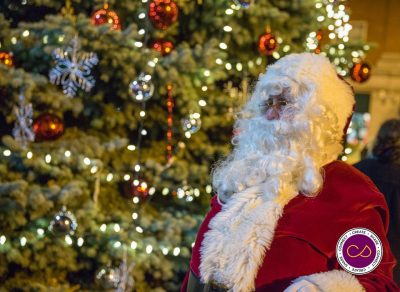 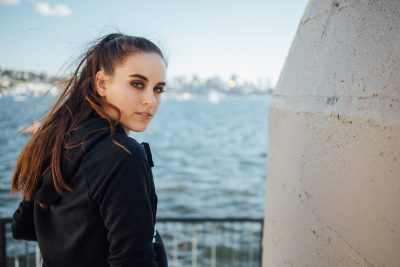 Neither snow, nor rain, nor heat, nor gloom of night will keep hundreds of Salem kids from waiting at the foot of the Hawthorne Hotel tonight for the Arrival of Santa. A much-beloved tradition to kick off the Holiday season in our community, it takes place rain or shine with the assistance of the Salem Fire Dept.

Santa Claus will arrive at the top of the Hawthorne Hotel at 18 Washington Square promptly at 6pm but we recommend getting there by 5:45pm at the latest. It is always a crowd filled with “kids of all ages!”

A procession will then continue down the Essex Street Pedestrian Mall for the Holiday Tree Lighting at Lappin Park. This is also a great gathering of community members and merchants.

Participants are encouraged to bring lanterns (store-bought or homemade) to carry in the procession. Safety first, though – electric candles, please!

Salem Main Streets would also like to thank the City of Salem, the Hawthorne Hotel, MeetingHouse Church, North Shore Marine, All Star Collision & Towing, Gigi Gill, and the many other community partners who make these special events possible.

Now, c’mon down and join us if you can. 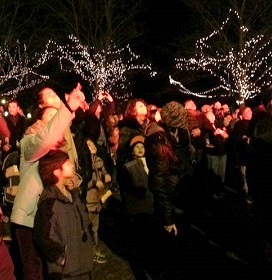 Take a break from your holiday shopping this Friday to join friends & neighbors in the community of Salem as we celebrate two traditions: Santa’s Arrival and the lighting of Salem’s Holiday Tree.

This year, though, Salem Main Streets and the City of Salem have combined these two separate activities into one flowing event to maximize the fun factor for children and adults.

And with the projected weather forecast calling for partly cloudy skies with a high of 60 and a low of 47, we expect a good sized crowd!

Santa Claus will arrive on the roof of the Hawthorne Hotel (located at 18 Washington Square W) promptly at 6pm, then with assistance from the Salem Fire Department will be brought to street level where he will lead a procession down the Essex Street Pedestrian Mall to Lappin Park (next to the Bewitched Statue at the intersection of Essex & Washington streets). 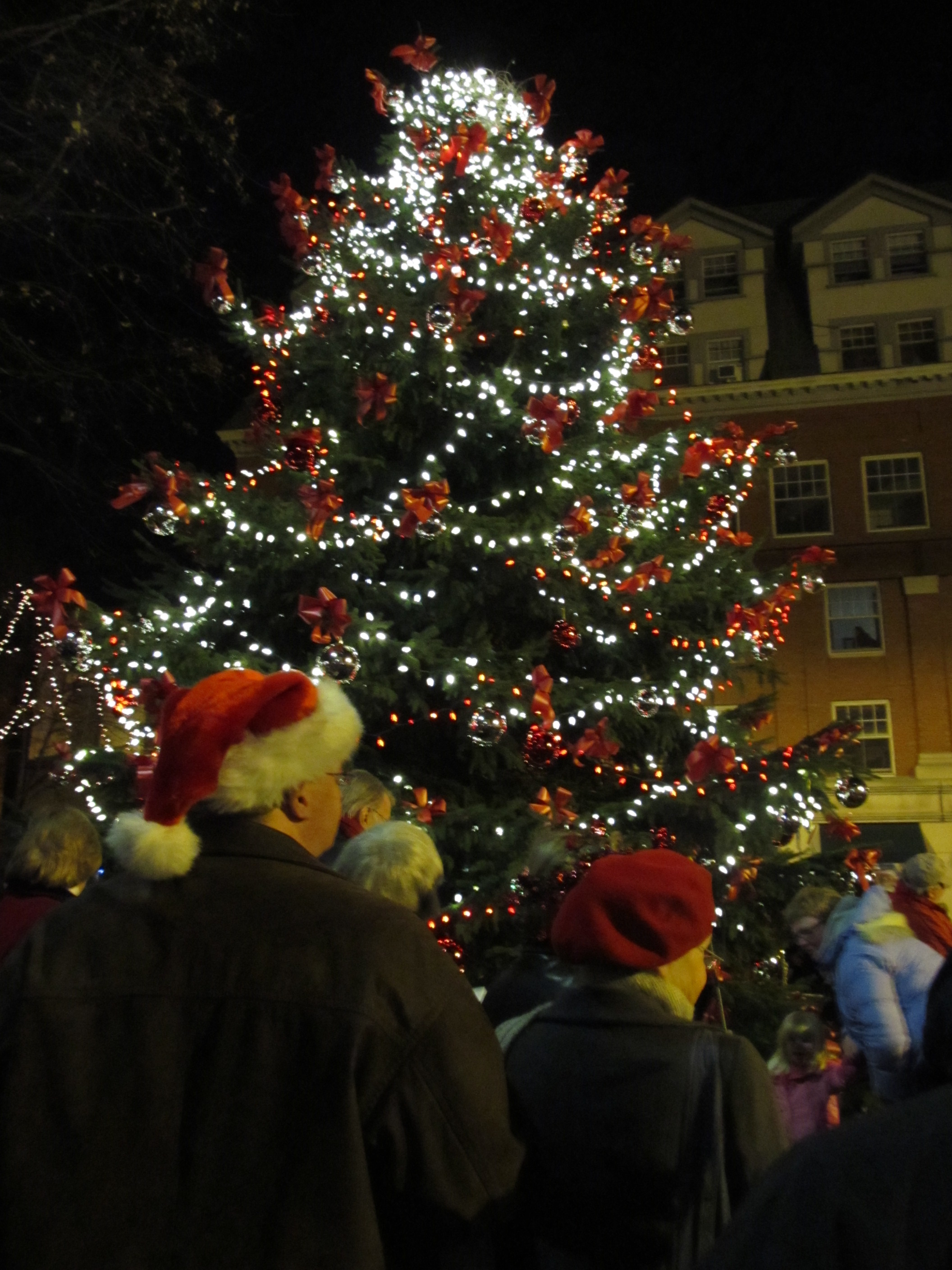 From there we invite you to join Santa and Mayor Kimberley Driscoll for the Holiday Tree Lighting.

Bring the entire family out for carols, festivities, and fun!

Salem Main Streets would like to thank the City of Salem, the Hawthorne Hotel, MeetingHouse Church, North Shore Marine, All Star Collision & Towing, the Salem Common Neighborhood Association, and the many other community partners who make these special events possible.

…And you thought Halloween was busy in Salem. Today and tomorrow we have several events to lead off the winter holiday season in style. 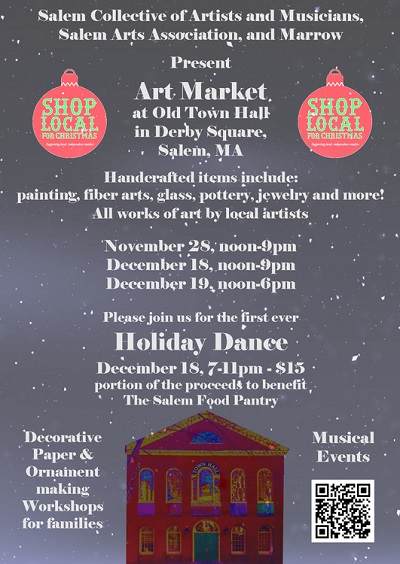 In search of the perfect, unique little gift that says “I put some extra effort and didn’t just drive to the mall or walk into a giant department store?” Look to Old Town Hall in Derby Square where today (11/28/14) from noon to 9 pm will be an Art Market, courtesy of the Salem Collective of Artists & Musicians, the Salem Arts Association and Marrow.

There you will discover handcrafted items such as paintings, fiber arts, glass, pottery, jewelry and more. These works of art are created by local artists.

But that’s not all, later from 7-11 pm will be a Holiday Dance with a portion of the proceeds to benefit the Salem Food Pantry.

It’s just a tree and some lights. But it is so much more. At approx. 6:15 pm on Nov.28th, Lappin Park becomes the focal point of the city when residents join Mayor Kimberley Driscoll in lighting Salem’s Holiday Tree.

(The Park is the grassy area next to the Bewitched Statue at the intersection of Essex Street and Washington Street— directly across from our still standing Haunted Happenings Visitor Info Booth!).

It is a holiday tradition that lights up not only the tree but the eyes of children in the crowds with awe and delight. So bring the entire family out for carols with the Paul Madore Singers; as we expect it to be a bit cool, there will also be available cocoa and snacks! 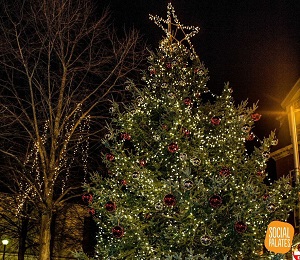 The event is organized by Salem Main Streets and the City of Salem. This year’s tree is provided in part by a donation from the MeetingHouse Church and numerous donations from Salem’s October visitors. Decorations and lights were made possible by individual contributions and donations from a number of local businesses, including Morning Glory Bed & Breakfast.

Salem Main Streets would additionally like to express appreciation to North Shore Marine and All Star Collision & Towing for their services in delivering the tree, and the Salem Department of Public Works and Gary Gill for decorating the tree.

And you need to put presents under your own tree (if you do a tree). Can’t find what you need at the Art Market? Black Friday shopping may not help you. We suggest you widen your search zone to all of Salem. We are a small business mecca. Almost every store is owned and operated by a small business operator, not a chain. Salem is where you can walk a block in any direction and find unique items for men, women, children and pets.

Saturday, Nov. 29th is Small Business Saturday, a day to celebrate and support small businesses and all they do for their communities. To encourage Salem residents to “Shop Local First” this holiday season, Mayor Driscoll has announced that parking in Salem will be free on November 29th in both municipal garages and on Washington, Front and Essex Streets. On November 30th all parking will be free, including at all meters, in both municipal garages, and in all municipal surface lots.

You can drive to the malls, park half a football field away from the stores, and once inside feel like you are on a treadmill forced to walk with the flows of the crowds. Or come to Salem, find convenient parking, and walk whatever way you feel to stores or restaurants. It’s your choice. Really, it’s your choice.

No not Halloween. We do celebrate other holidays and traditions here in Salem Ma. In fact, we are building quite a resume as a December event destination for residents, North Shore neighbors and tourists. You will read about these in upcoming blogs.

As a lead-in have you noticed some subtle changes in Salem as you walked around (we love walking around the Downtown district, everything is so conveniently located) this weekend?

Ribbons and wreaths are appearing all over the place. Elves? Gremlins? (Well, it is Salem…).

There is a really tall tree in Lappin Park. Did Samantha twitch her nose and it magically appeared? 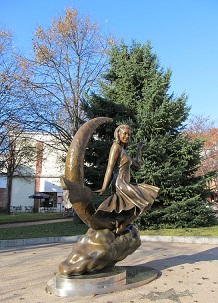 As residents know, every year we join Mayor Kimberley Driscoll in lighting Salem’s Holiday Tree at Lappin Park (next to the Bewitched Statue at the intersection of Essex and Washington Streets).

This year’s event will take place on Friday, Nov. 29 at 6:30pm. We invite you to bring the entire family to enjoy carols with the Paul Madore Singers; there will also be cocoa and snacks on hand!

The event is organized by Salem Main Streets and the City of Salem. This year’s tree comes from Benjamin Nutter Architects in Topsfield, thanks in part to a donation from the Meetinghouse Church. Decorations and lights are made possible by individual contributions and donations from a number of local businesses. Salem Main Streets would like to thank North Shore Marine and Bill’s Auto Clinic for their services in delivering the tree.

And keep an eye open for changes to the storefront windows of merchants along such Salem locales as Essex, Washington, Front and Derby streets. They will also be getting into the Holiday Spirit.