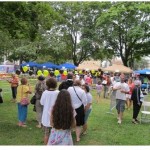 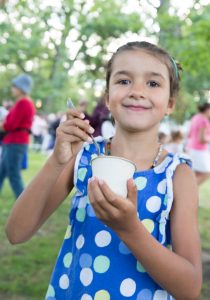 Are you ready for a really cool event this summer? It’s set for Wednesday, August 8 on the Salem Common from 6:00-7:30 p.m., rain or shine. Yes, it’s time for the Salem Ice Scream Bowl when residents (and visitors) have the opportunity to sample some of the best ice cream on the North Shore from popular area ice cream shops.

Did you know that the U.S. ice cream industry, from neighborhood shops to national brands, contributes more than $39-billion to the national economy and creates more than 188,000 jobs nationally? Or that the average American consumes more than 23 pounds of ice cream per year. Wow!

Among the local businesses serving classic flavors and new combinations Wednesday night will be Melt Ice Cream, Maria’s Sweet Somethings, Captain Dusty’s, E.W. Hobbs Ice Cream, Cherry Farm Creamery, and more. The Salem Ice Scream Bowl is a fun event for both children and adults to cool down from the heat and enjoy tasty ice cream.

Always a favorite part of Salem’s two-week long Heritage Days celebration, this year’s Ice Scream Bowl will be followed directly by the Salem Common Neighborhood Association’s Movie Night! This Wednesday’s movie will be A Wrinkle in Time, starting at 8 pm. Bring a blanket and camp chairs so you can settle in after your ice cream to catch an outdoor movie with your neighbors.

The cost is $6 for adults and $4 for children. Tickets are purchased on site on the day of the event, cash only.  A spoon and napkins will be supplied with the purchase of a ticket

The Ice Scream Bowl is still going green! All of our materials are recyclable or compostable in an effort to reduce the impact of this popular event.

Proceeds support Salem Main Streets, the downtown revitalization nonprofit that organizes the Salem Farmers’ Market and many other events in downtown Salem, as well as offering direct support to downtown businesses. The Ice Scream Bowl is coordinated in partnership between Salem Main Streets and the City of Salem as part of Salem Heritage Days.

For any other questions or comments regarding this event, please contact Kylie Sullivan at Salem Main Streets at (978) 744-0004 x115 or email at kylie@salemmainstreets.org. 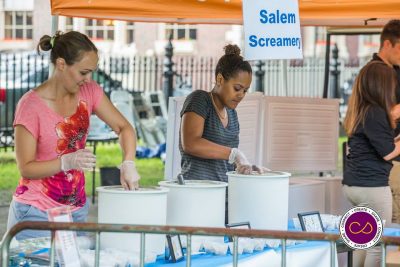 Short of going to a Museum of Ice Cream, the next best thing is going to the Salem Main Streets Ice Scream Bowl this Tuesday from 6-7:30pm where, for a small fee, you will sample a variety of ice cream from multiple local vendors. As in past years, the event will take place on the Salem Common.

This Heritage Days Festival favorite gives “kids of all ages” a chance to taste some classic flavors as well as some exciting new combinations from the area’s premier ice cream shops. 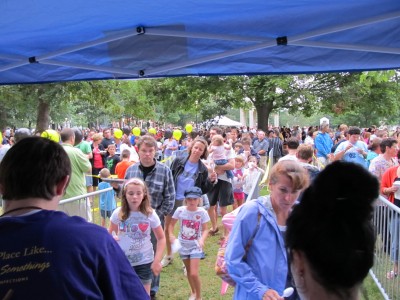 A few of the businesses serving samples at the event include Captain Dusty’s, Cherry Farm Creamery, Maria’s Sweet Somethings, and Melt Ice Cream.

Kylie Sullivan, SMS Executive Director says, “North Shore 104.9 will also be in attendance with fun games and takeaways. New this year, we will be featuring a ‘community fair’ of sorts, where a number of kid-focused community groups and organizations (such as Salem Youth Soccer, Girl Scouts, Mass in Motion, and the SPUR Backpack Drive) will be present.”

The cost is $6 for adults and $4 for children. Tickets for the Ice Scream Bowl are purchased on site at the event. A spoon and napkins will be supplied with the purchase of a ticket.

The Ice Scream Bowl is coordinated in partnership between Salem Main Streets and the City of Salem as part of Salem Heritage Days, a 10 day event to celebrate the people of Salem.

For any other questions or comments regarding this event, please contact Kylie Sullivan at Salem Main Streets, (978) 744-0004 x15 or email at kylie@salemmainstreets.org.

Kylie adds, “Salem’s Ice Scream Bowl is a fun event for both children and adults to cool down from the heat and enjoy tasty ice cream. Current weather forecast calls for sunny skies and a high of 82 degrees. Ice cream sure sounds like a good idea!”

Whether you’ve come to Salem MA by car, motor bike, train, ferry, or bus, we hope you are enjoying yourselves during this week-long (Aug 1-9) Heritage Days celebration unfolding on our streets, sidewalks, harbor and grassy areas. 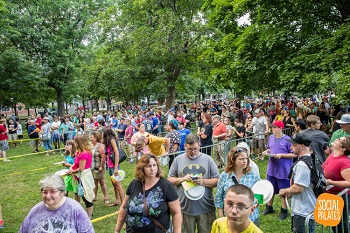 On Monday, beginning at 5pm (or sooner) there will be winding lines of people at the Salem Common waiting for the opportunity to sample pizza, vote on best pizza categories, and have a fun time interacting with other aficionados of the food that is sold at the rate of 3 billion pies annually in the U.S.

That is a lot of pizza. In fact, also according to Pizza.com, each person in America eats about 46 pizza slices a year. Average might be higher in Salem area when you consider that on Monday for a $7 donation fee (funds benefit the Salem YMCA) adults and kids (for a $5 ticket) get to sample from not one, not two, but several local pizza makers participating in this community event.

Advice: Bring a rectangular plastic container (the kind you use for leftovers) to hold your multiple pizzas.

This fan favorite is followed on Tuesday at 6pm, also at the Salem Common, by the Ice Scream Bowl where this time a number of participating ice cream shops have lined up booths for you to sample the best of the best in something perfectly suited for the warm weather we’ve been experiencing. 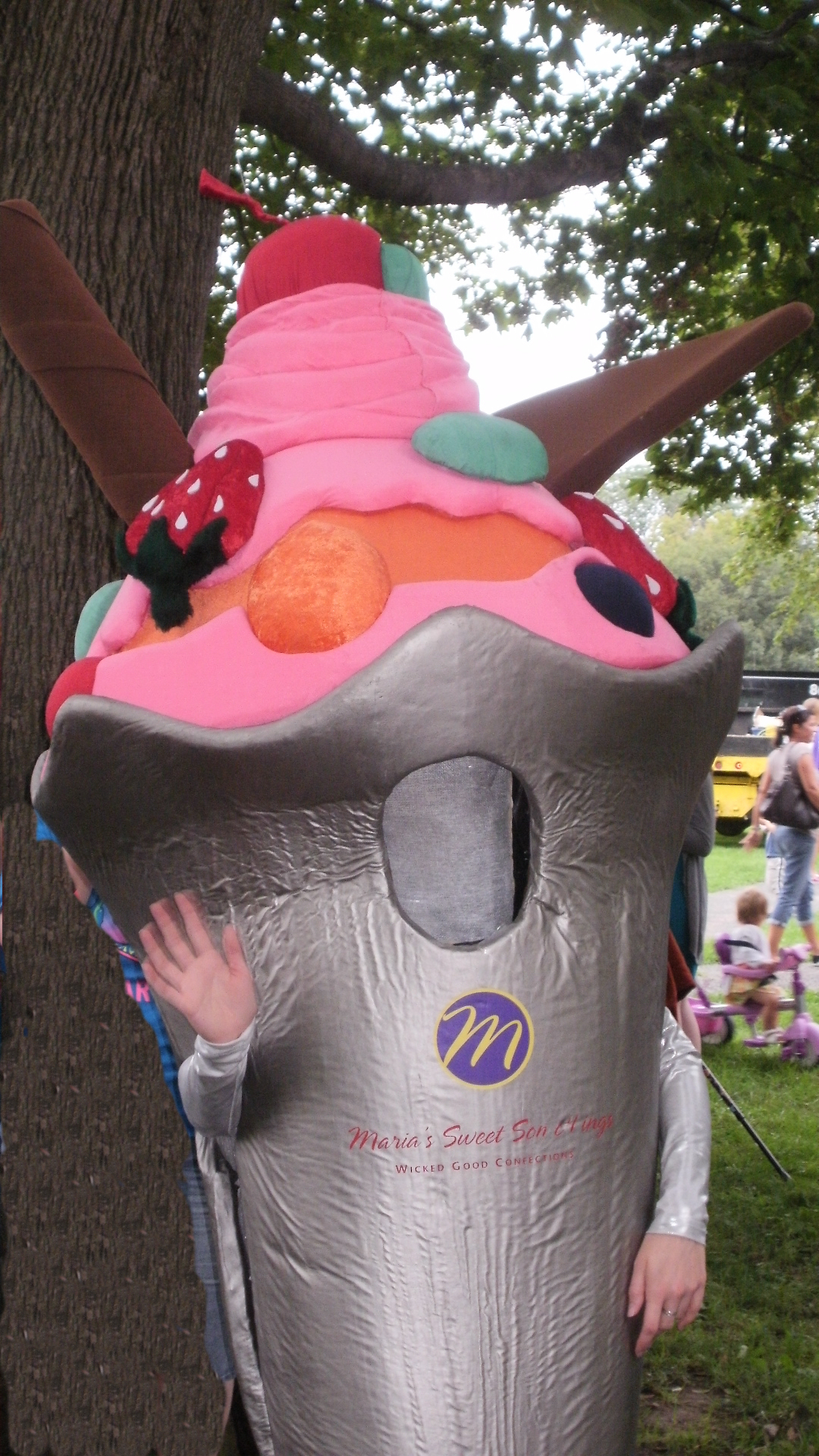 North Shore 104.9 FM will be in attendance with fun games and takeaways, Elsa from “Frozen” will be making an appearance, and other kid’s activities will be available throughout the event.

Ticket prices are $6 for adults, $4 for children and proceeds benefit projects of Salem Main Streets.

According to IceCream.com it takes 50 licks to finish a single scoop ice cream and that 87% of Americans have ice cream in their freezer at any given time (and they are right, just checked the freezer and there are two pints in there!).

Advice: Bring muffin or cupcake bakeware containers to hold the ice cream, especially if children will be part of your entourage for the evening.

Following both events at 7pm the Salem Willows Shell will play host to musical performances that will round out your day. Monday will offer Salem Community Concert Band and Community Jazz Band, both of which are made up of Salem residents from grade 7 through adult.  Tuesday, the North Shore Concert Band Series will present a “Salute to Swing” music from the Big Band Era, featuring the Gerry Barrett Swing Band.

These are just some of the many events scheduled during Heritage Days. Check the community calendar for other events on these and the remaining days of the Festival.

Always a favorite among the youth of Salem, the ice cream lines fill up quickly and have been known to stretch back several hundred people in length.

For the price of admission ($5 for adults and $3 for children), you will be given a ticket that is the key to going down aisles which lead to booths where some very nice local merchants have set up shop to give you a free sample of their ice cream. That’s right, one sample from each participant!

No need to feel bad about consuming all that ice cream. According to IceCream.com, the U.S. enjoys an average of 48 pints of ice cream per person, per year, more than any other country.

A spoon and napkin will be supplied with the purchase of a ticket. There will also be free face painting for kids and music by DJ Doug.

This is a fundraiser for Salem Main Streets, a non-profit organization; tickets are purchased on site on the day of this special event which is in keeping with our goal of revitalizing downtown Salem as a vibrant year-round retail, dining, and cultural destination. Salem Main Streets also organizes the Salem Farmers’ Market, Salem Arts Festival, and other events in downtown Salem.

The Ice Scream Bowl is coordinated in partnership between Salem Main Streets and the City of Salem as part of Salem Heritage Days, a 10 day event to celebrate the people of Salem.

For any other questions or comments regarding this event, please contact Kylie Sullivan at Salem Main Streets at (978) 744-0004 x15 or email at kylie@salemmainstreets.org.

Festival time approaches! No not Haunted Happenings. That celebration of Halloween is reserved for October. Right now we in Salem need look no further than August and Heritage Days (Aug. 1-11 in various places throughout Salem).

“Heritage Days has been a tradition in Salem for over 50 years and this year we have 11 days of fun-filled events for kids of all ages,” announced Mayor Driscoll recently. “I would like to thank all of the event organizers for their commitment to ensuring that this long-standing community celebration continues.”

And we at Salem MainStreets echo that praise for local businesses and attractions.

For example, new this year is a Bridge & Back 10K Road Race, sponsored by Tavern in the Square, with all proceeds going to the Boys and Girls Club of Greater Salem. Also new is the Ladies Night Out Run, where flowers await runners at the red carpet finish line and mouthwatering fine chocolates, hors d’oeuvres, and wine will also be available.

For those that are craft enthusiasts, the Salem Collective of Artists and Musicians will offer a free button and card making workshop at Artist Row.

The Salem Council on Aging will also host activities exclusively for seniors including an ice cream social, a wellness fair, a picnic at Winter Island, and a dinner dance.

Among the consistent big crowd drawing events are the Best Pizza Competition where over a half dozen local eateries offer samples, and on another night the Ice Scream Bowl features just as many ice cream establishments & restaurants offering something cool and sweet. Both events on the Salem Common.

And don’t forget the Essex Street Fair. This street festival has fun items for all ages, with something for everyone. Crafts, jewelry, paintings, stained glass, and more will be featured along the Essex Street Pedestrian Mall on Saturday & Sunday.

Truthfully there are too many activities to list in this blog. A complete schedule of Heritage Days events can be found on www.salem.com in the Events Calendar section.